The Official Firehawk Message Board

Door panel crack prevention:
SO I am sure some, if not many of you have had the top piece of plastic on your door panel crack. Here are a couple of tips to prevent it and how I modded my panels.

Cause:
There are several possible causes from impact or sometimes slamming doors which the only way to prevent is to not slam the door or hit it, but the one that gets people with age is the window sweep. The window sweep is held on from the factory with heavy duty staples. They are great for fastening, but as the sweep ages the rubber tends to shrink and the staple is not strong enough to hold it in place. It not only tears the rubber on the sweep a little, but as it shrinks it pulls in on the plastic on the door until "POP" the panel cracks. So the fix is fairly simple. Take the door panel off, remove the staples and replace them with small screws. when I say small I mean 4-6MM tops. The increased holding force of the screws will keep the sweep from shrinking down as much for a longer period of time. All you have to do is get the screws (I used brass and self tapping because they won't rust), put the sweep in place and carefully drill the appropriate sized hole through the sweep into the plastic, and then put the screws in. Go slow and make sure the alignment of the sweep is correct before you drill. Total cost was about $10. Also while you are in there make sure all of the door panel hook anti rattle foam is in place. Mine was missing a whole bunch of it. If it is missing just get some high density foam (any kind will do) cut it down to about a 2X2 piece, slit the middle, and slide it over the hook. 2 Very easy things to make sure your door panels stay in tip top shape. Mine were already a little busted up so they will have to be replaced eventually, but for now this should keep them looking decent until then. 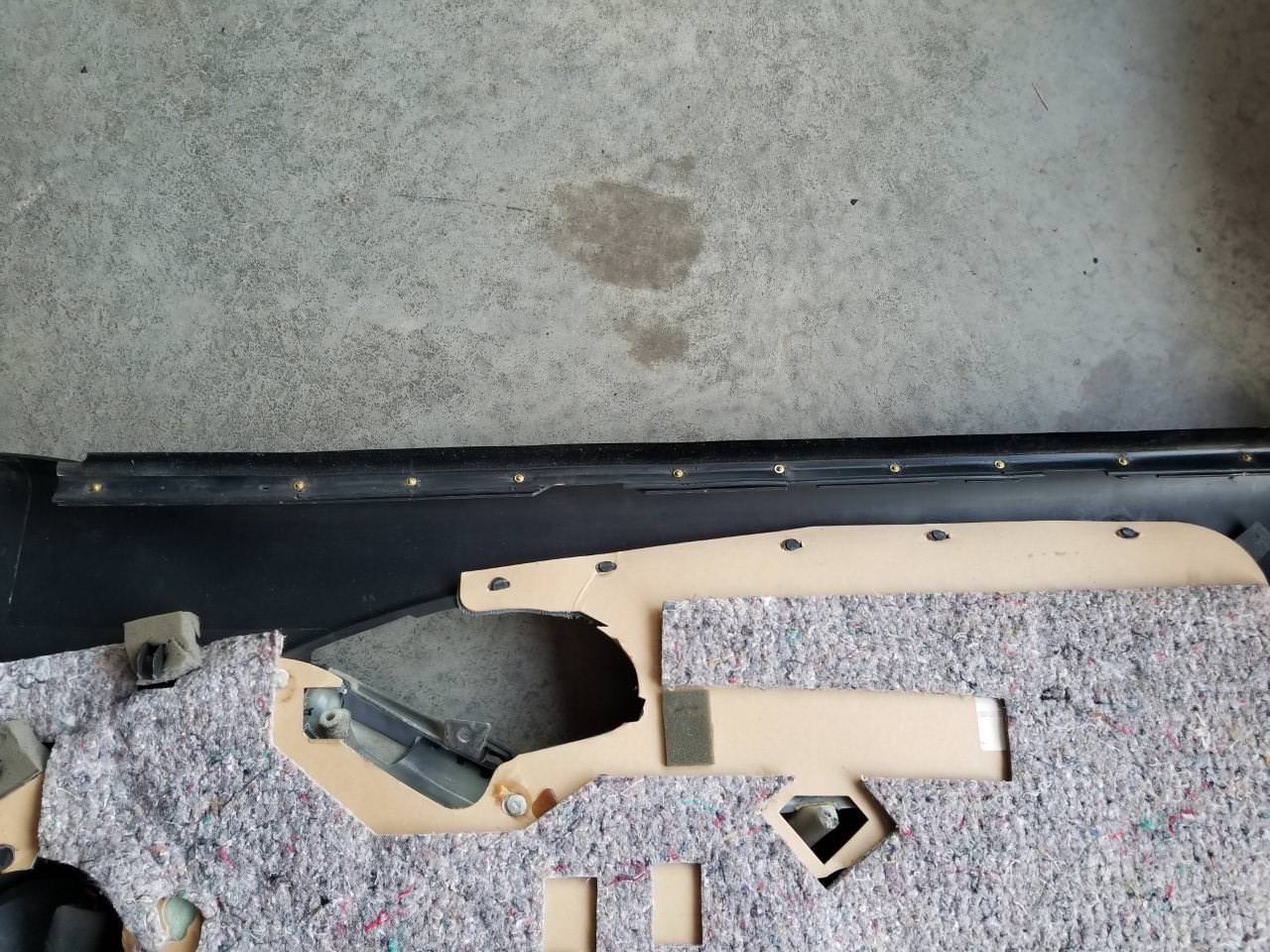 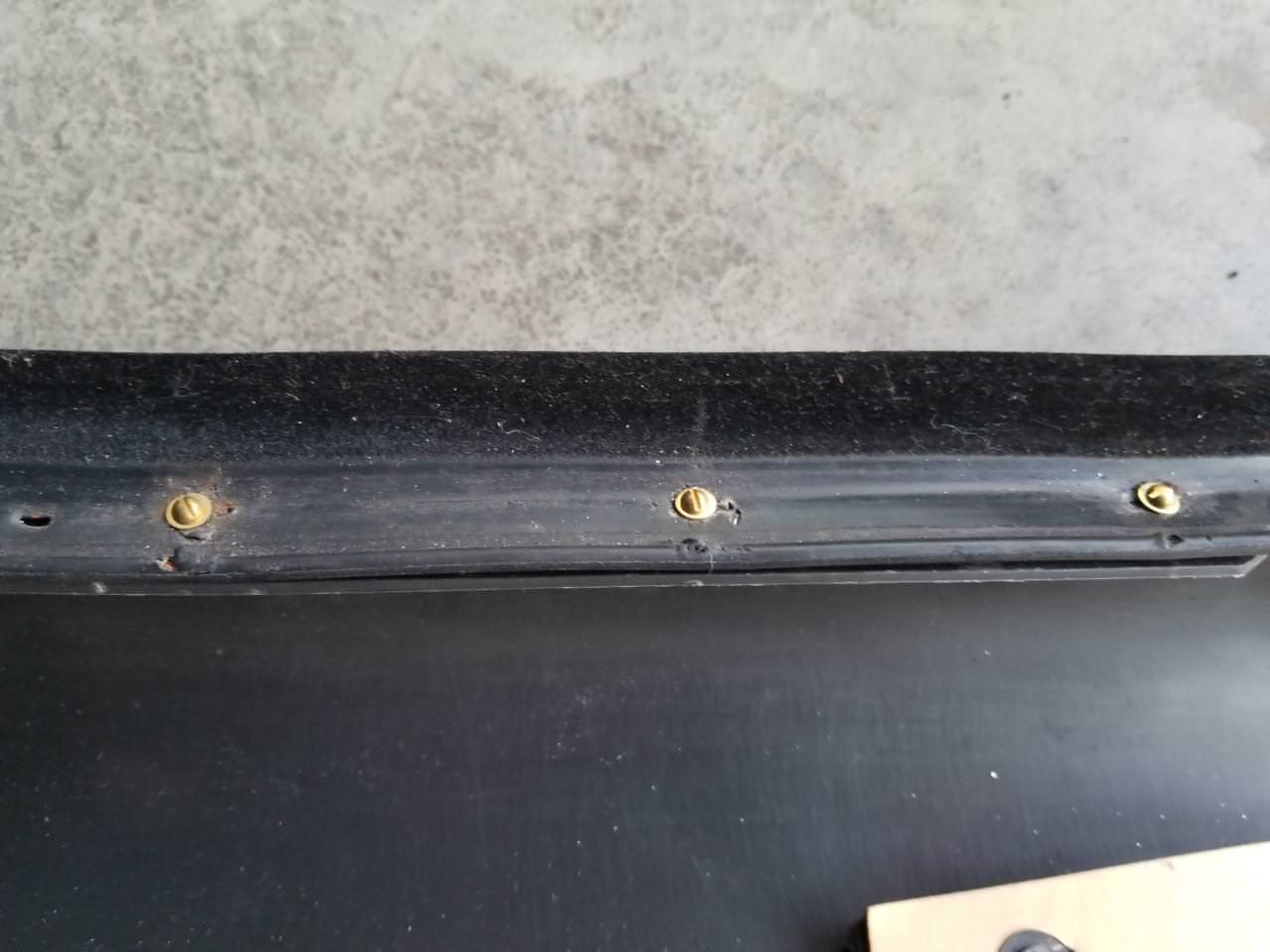 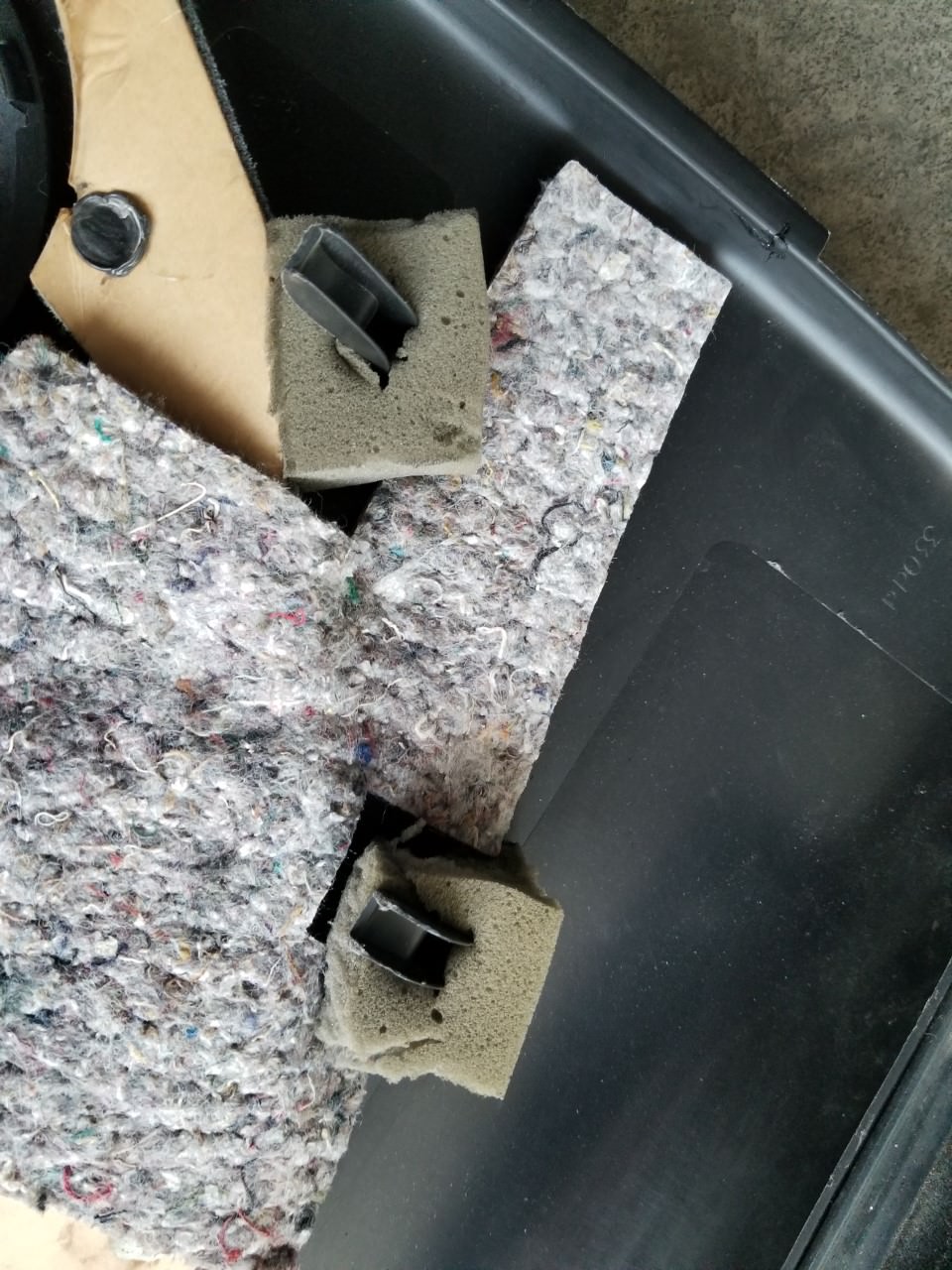 I did this as preventive maintenance years ago. I used 4mm stainless screws for a cleaner look. The only time you can see the screw heads is when then window is all the way down. Panels still look perfect. This procedure is well worth doing if your panels are not already cracked.
Top

Sorry I've been so quiet on this thread for awhile. The Hawk has been hiding away most of the summer, the original 10 bolt is getting a bit sketchy so I don't take it far. I also moved which has limited my ability to get rolling on the Axle rebuild at the shop. Might get some stuff done this weekend if I can get some quick welding done. I am good at many things, but welding is not one of them......
-Nick
2001 Formula Firehawk #293
Top

Got some of the work done for the 10 bolt. It is FAR from show quality but the intent is functionality and reducing the possibility of rust in the future.

**Important safety tip for this post, with the exception of the soap wear a respirator for all of these chemical treatments and paints and do them in a well ventilated area or if possible outside. They work very well but they are EXTREMELY hazardous to your health**


First I cleaned the ever living heck out of it with the Purple Castrol cleaner. I have not found anything that works as well at degreasing (that doesn't punch holes in the Ozone layer anyway). Once all the grime was off I could see what I had to work with. 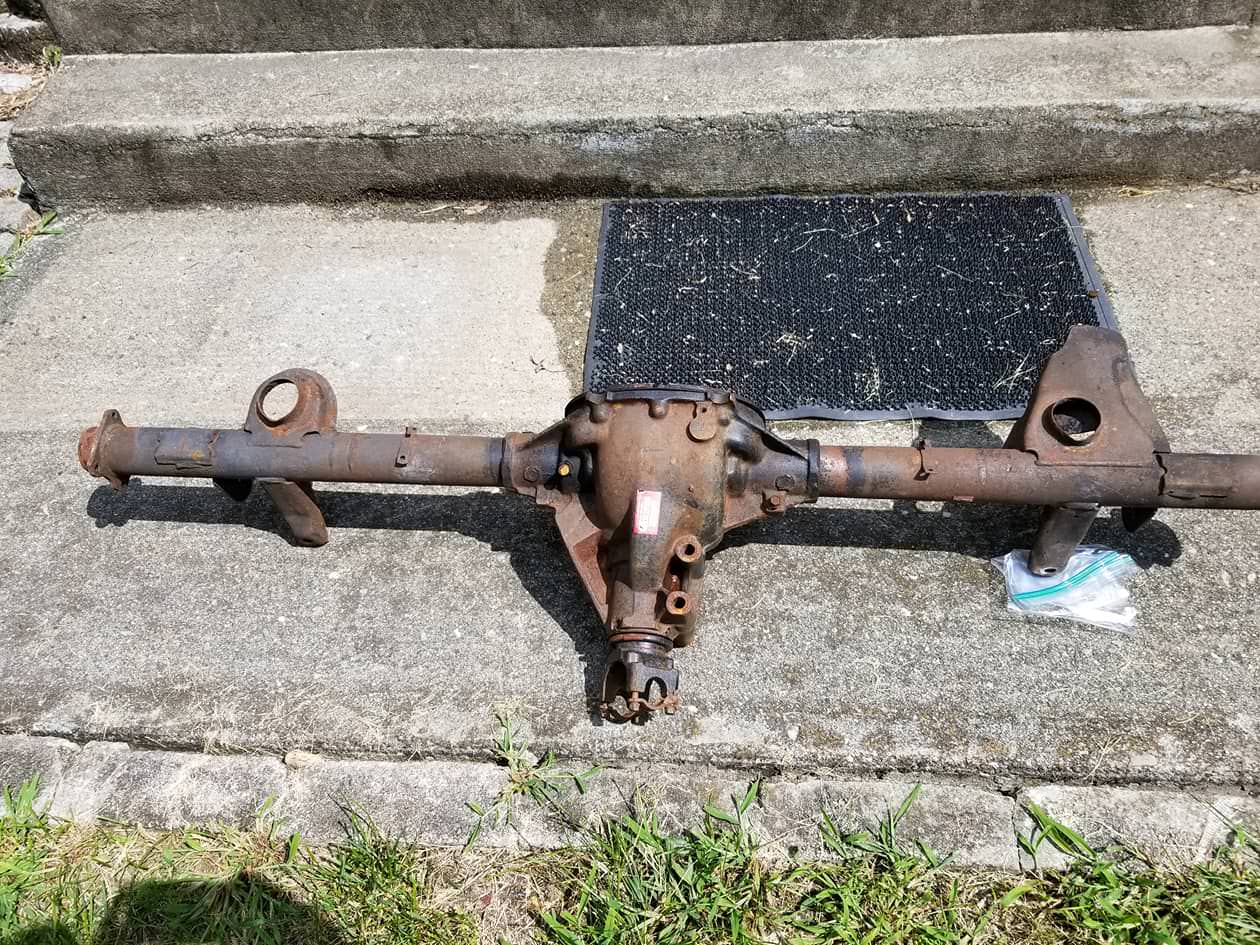 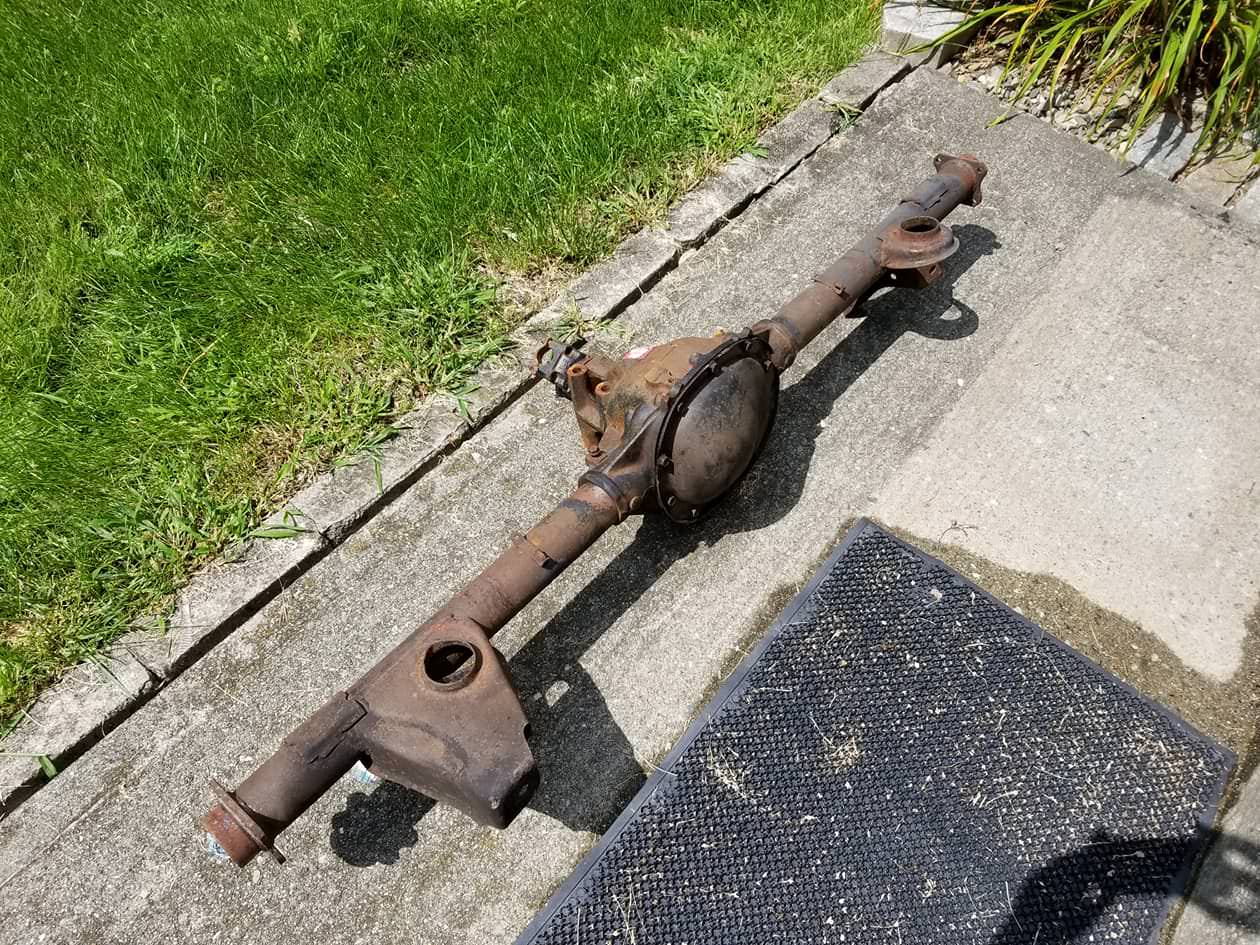 After that I packed it up and sent it out to have the axle tubes welded to the center section. Not the best welds I've seen, but I am terrible at it, lol. Welding the tubes takes a pretty big chunk of flex out of the rear which is one o the leading causes of failure on these cars. Every little bit helps. 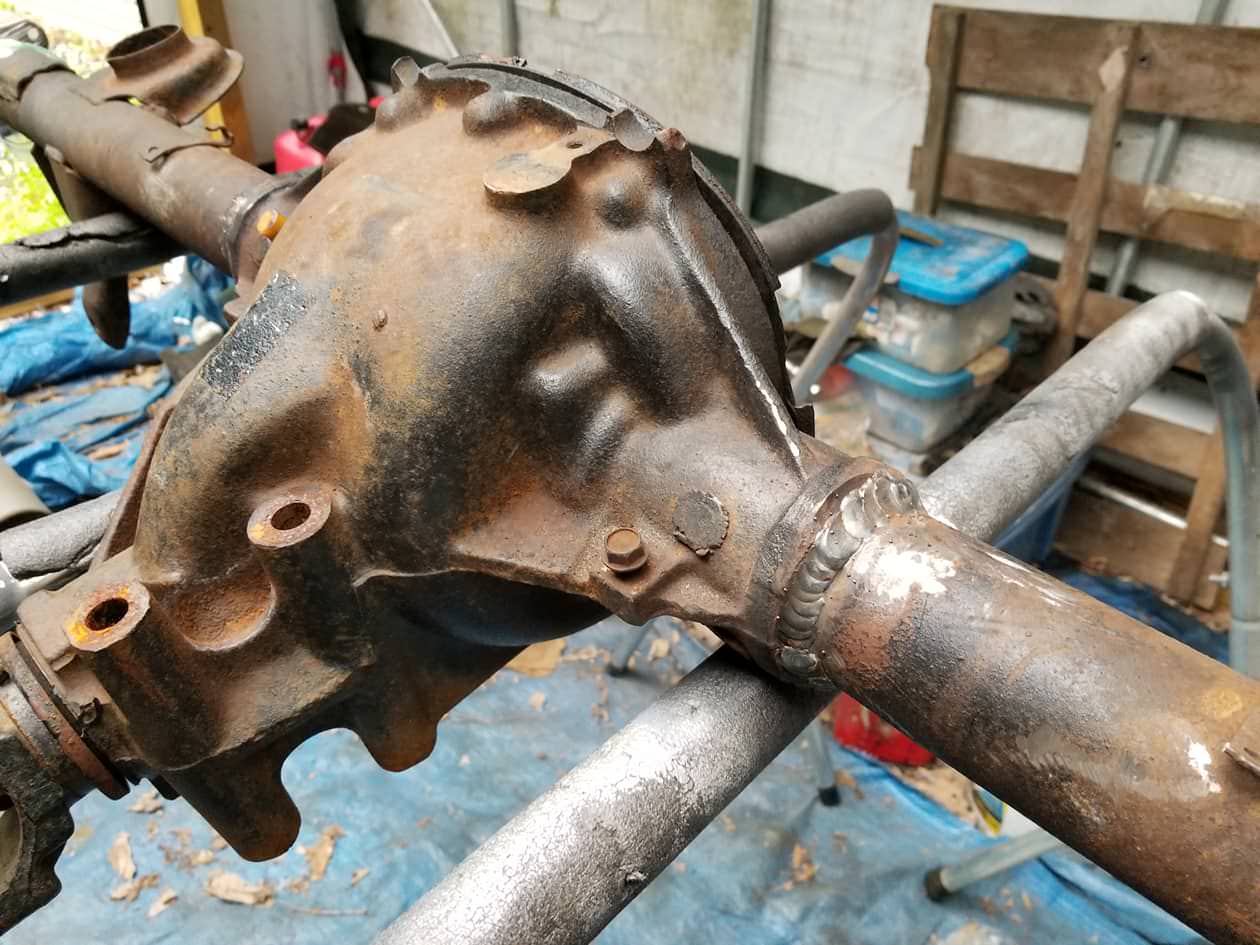 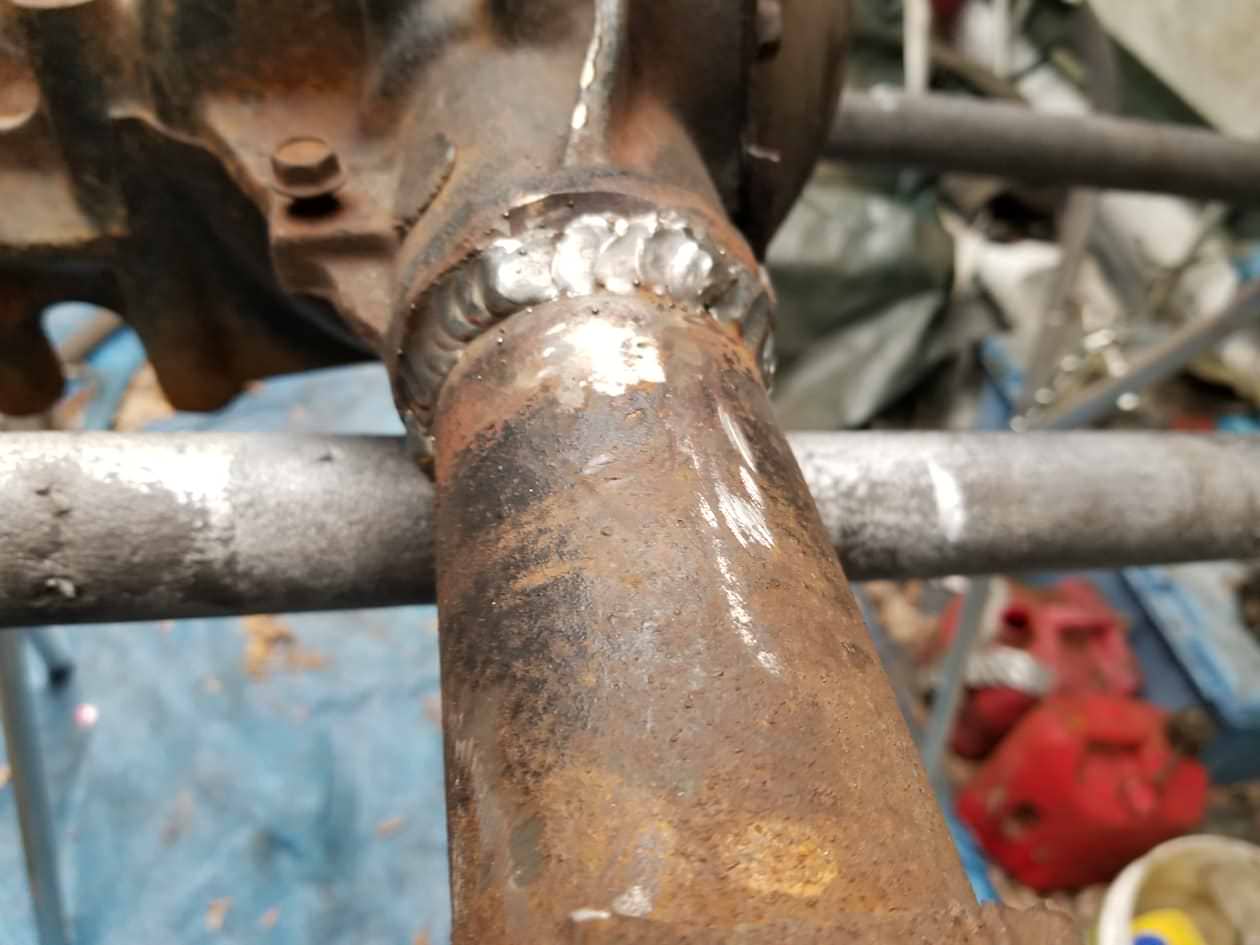 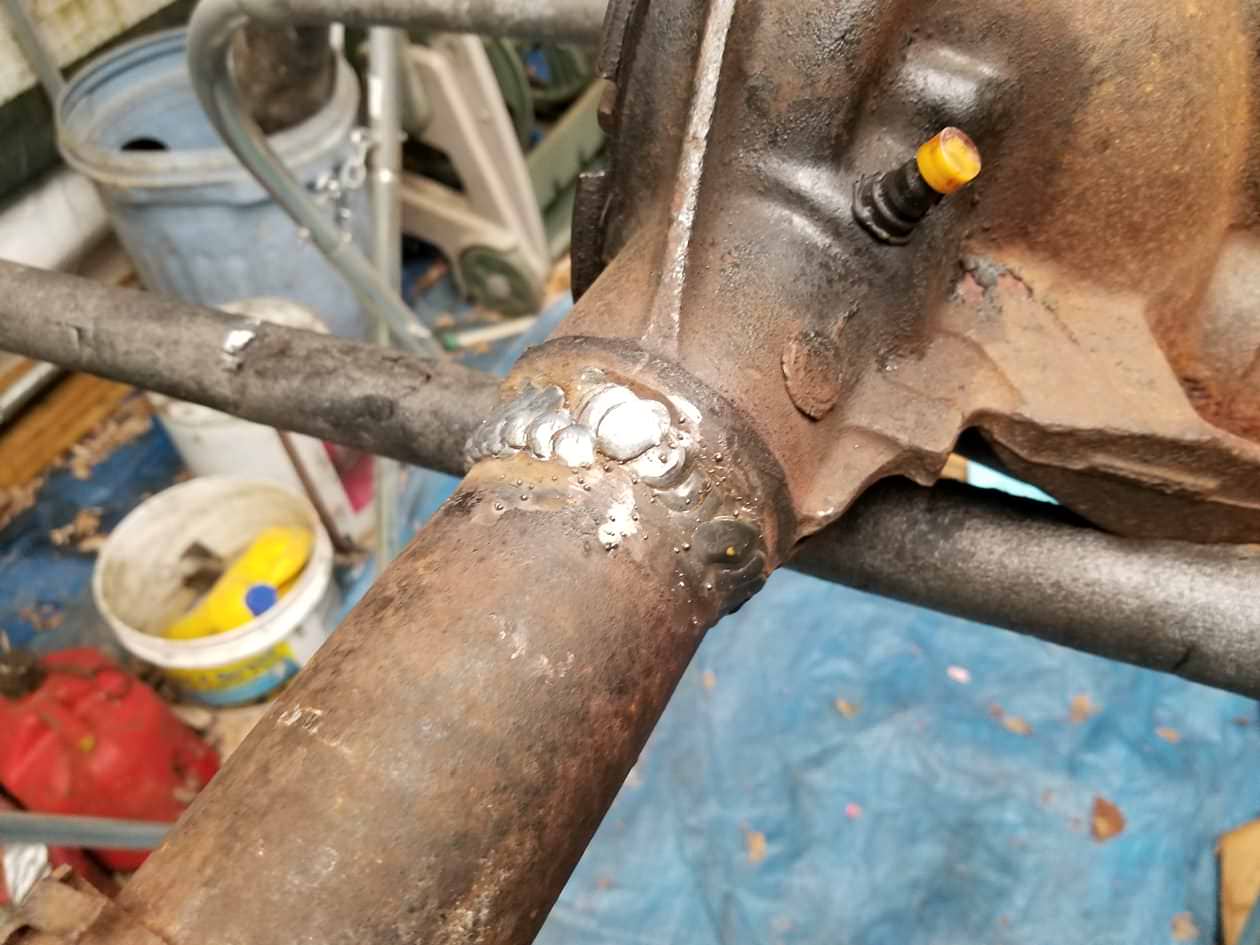 Now the real work began. With the amount of rust on it I decided to use a rust converter before I primed it. Converter will only stick to pure rust, but it chemically alters it into it's own primer.
***Note: A suggestion I would make is to use a red primer/rust encapsulator, I used black. They work identically, but the converter turns the rust black, and then priming and painting in black makes it difficult to tell what's covered and what isn't, as you'll see in the following pics**
I'm also changing out the yoke, which is why I did not mask it off to avoid getting paint on it

Here it is with the rust converter: 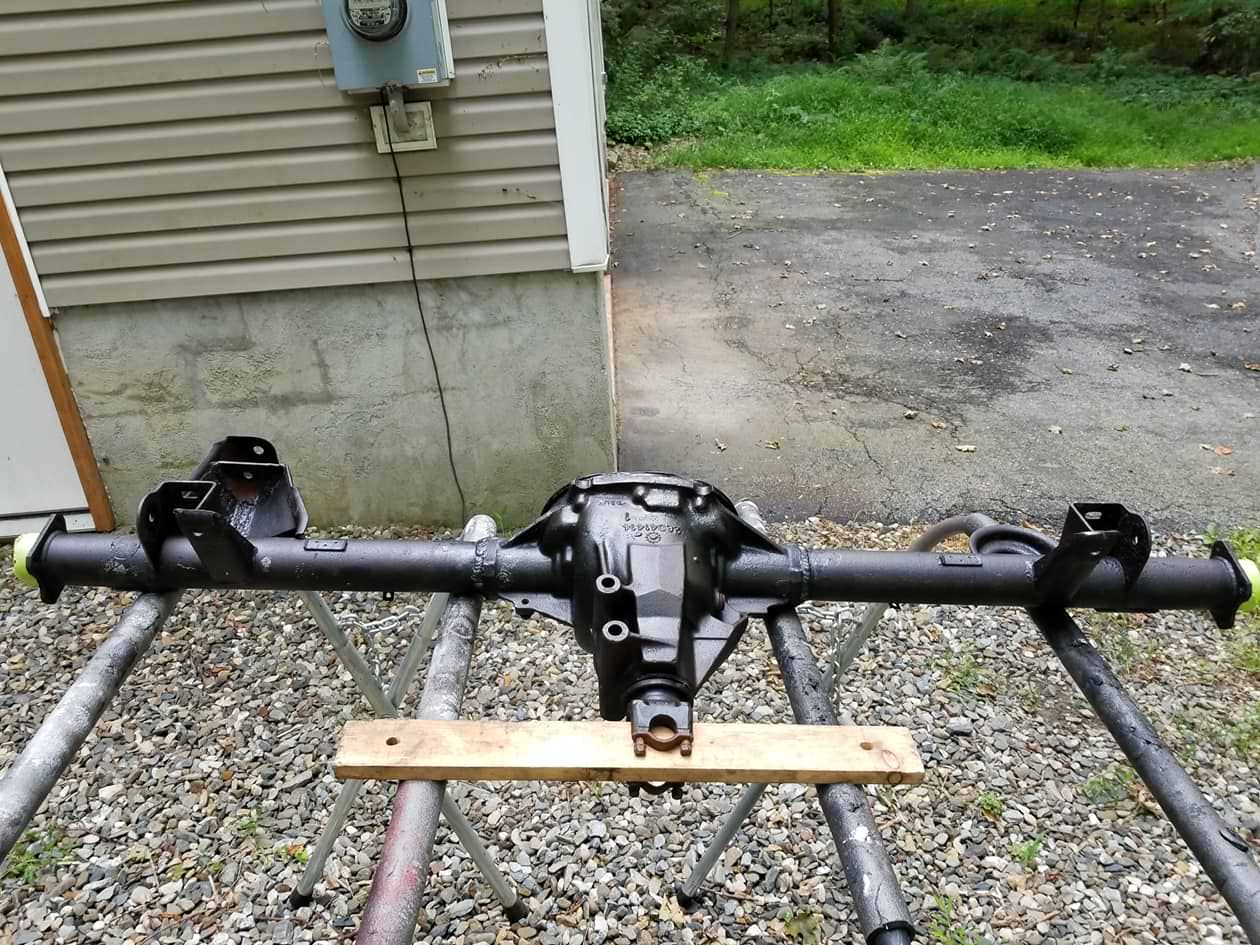 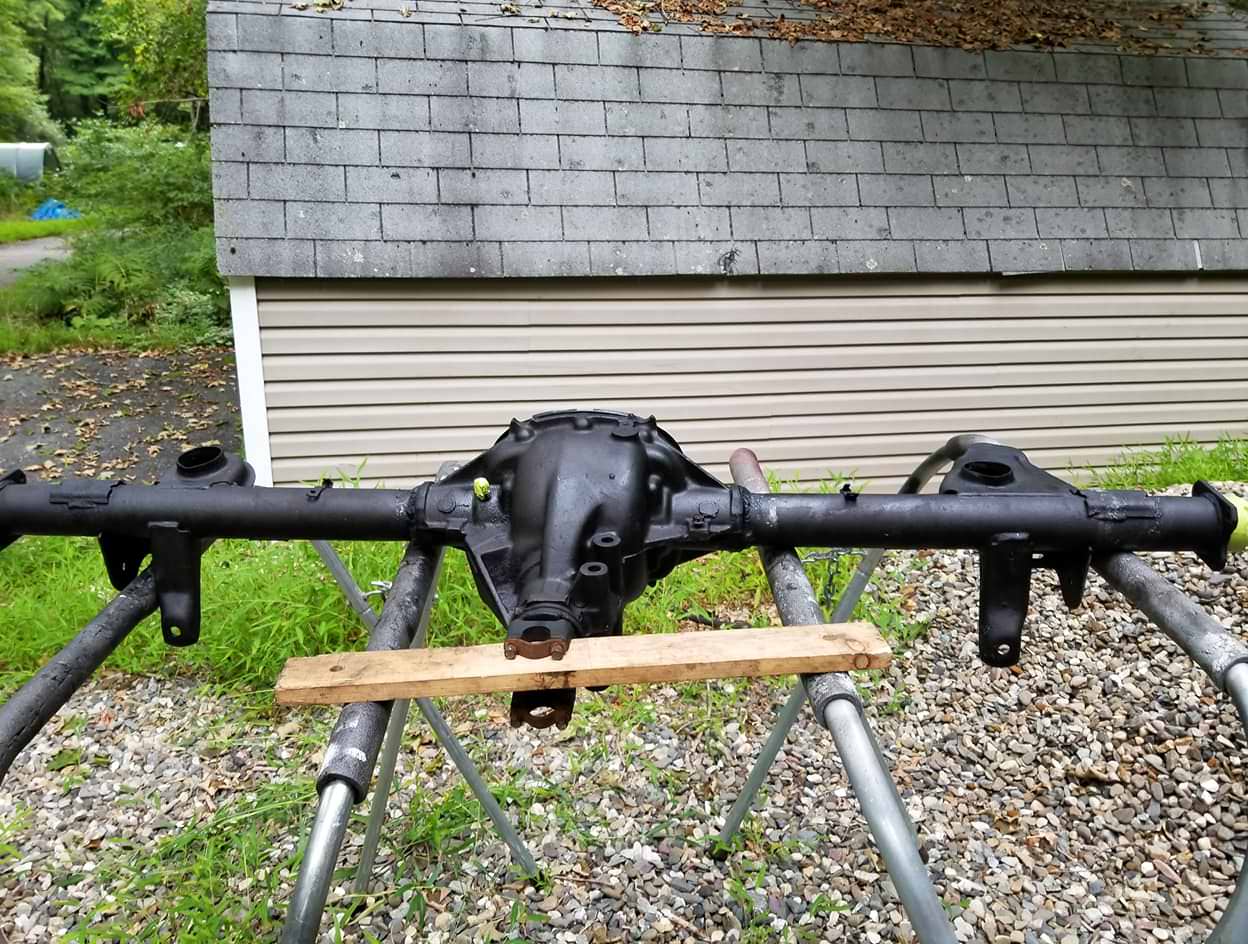 Then I primed it with rust encapsulator to prevent it from rusting again the future: 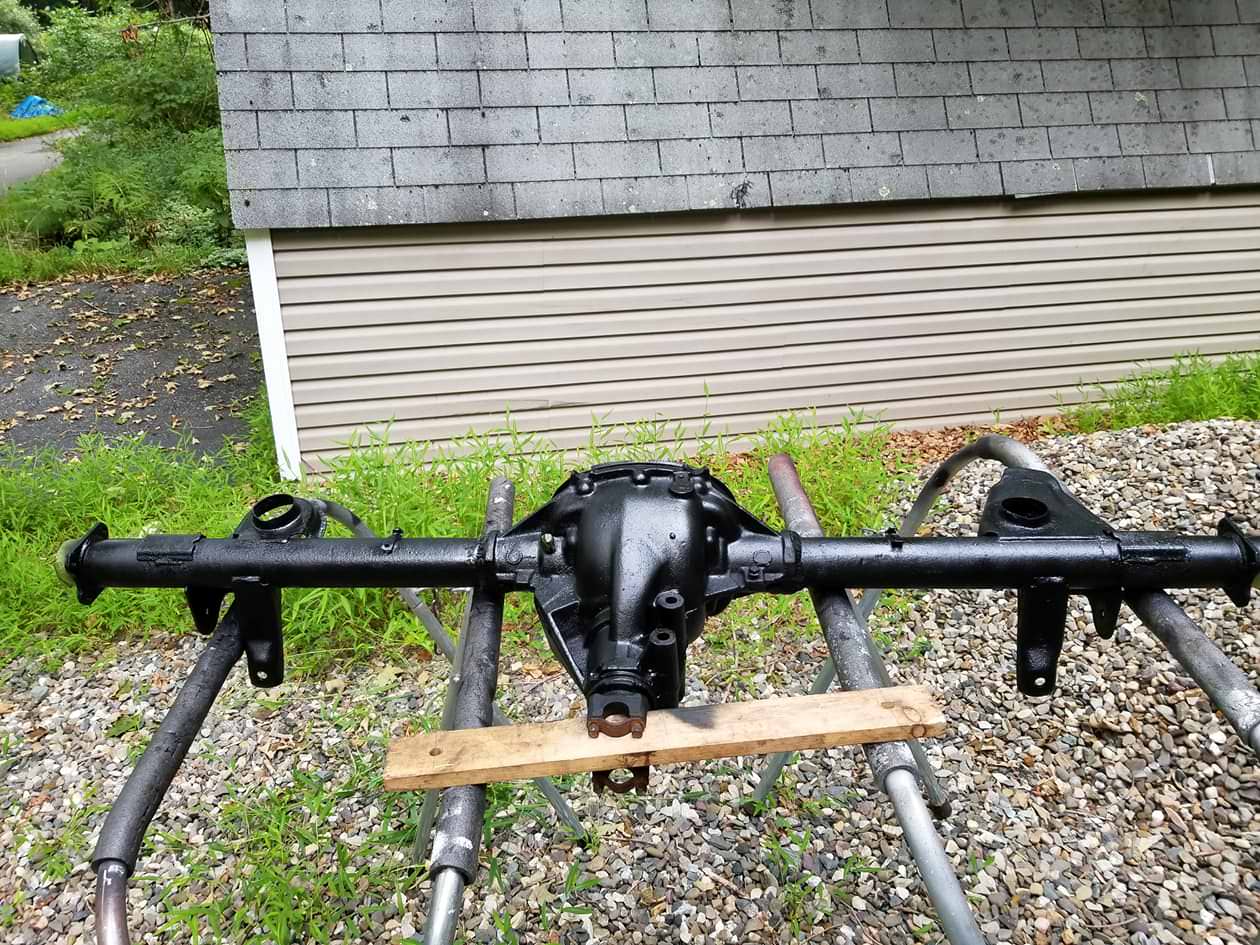 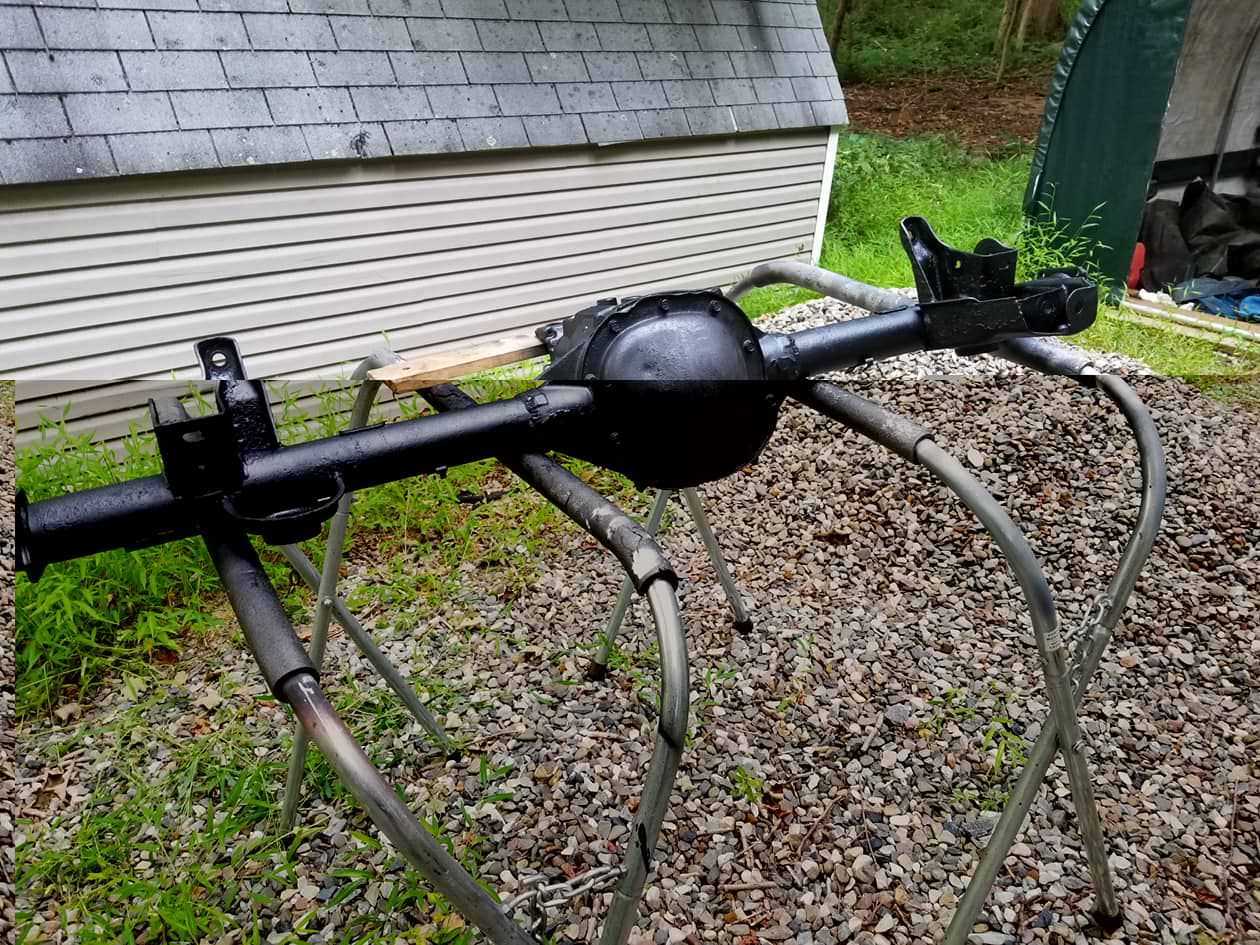 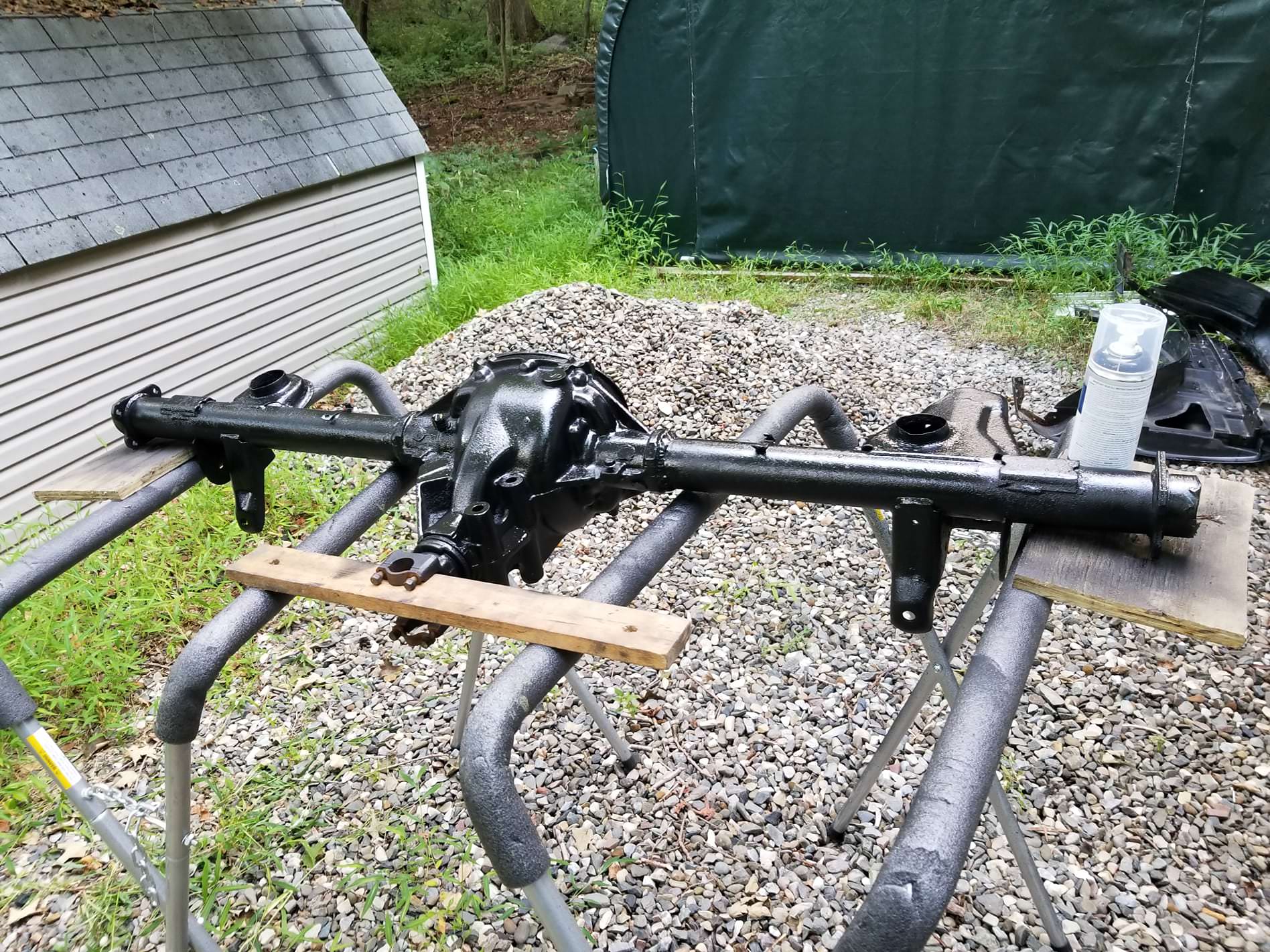 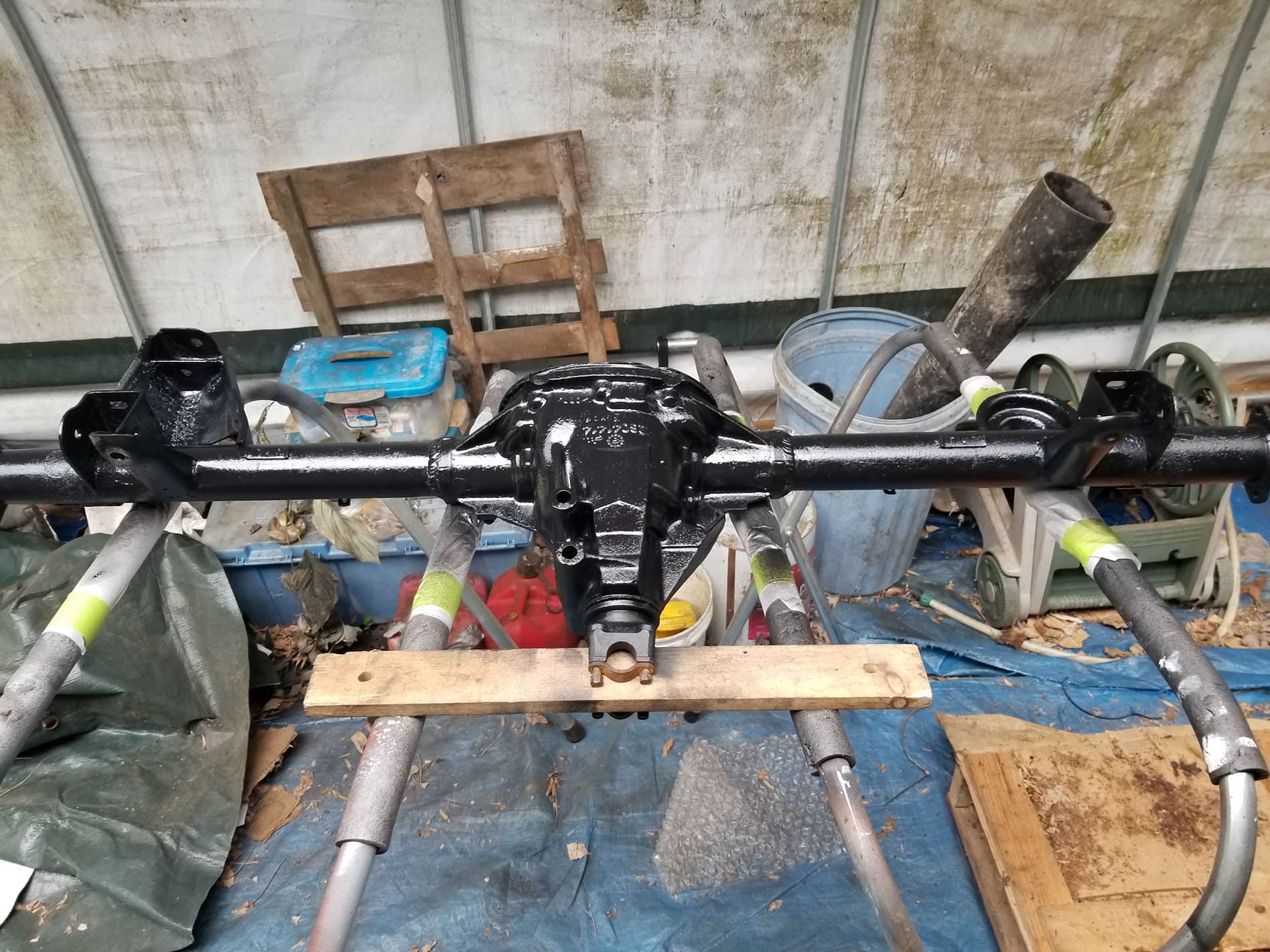 Watching paint dry is one of the more riveting aspects of auto restoration.
Top

LMC Headlamp install, headlamp housing replacement
Been awhile, with fall and winter approaching it's time to start wrenching again. Up next I decided to upgrade the headlamps from the stock sealed beams to the LMC Halogen bulb type. Disclaimer, this is really as simple as swapping your bulbs out, this is a bit more in depth because i also had a bad hinge on one housing. I did kinda short the pics a little, but it is all pretty straightforward.

1: If you are going to be removing the headlamp assembly, Pull the 2 10MM bolts from the top of the assembly where it bolts to the car. If you don't do it now the headlamp may block them. i think you will also be able to reach them if you pull the metal cover off the assembly, but I pulled the housing out as a whole
2: turn on the headlamps and either disconnect the battery (easiest if you are just doing the bulbs) or pull the fuses for the motors, which are located under the hood, and turn the headlamps back off. I did this because I knew I would be adjusting the new housing which requires running the assembly up ad down several times.
3: remove the 3 screws that hold the plastic headlamp bezel and remove the bezel.
4: If you are doing just the bulbs, unscrew the sealed beams and install the new housings
5: remove the 2 10MM bolts that attach the nose to where the hood latch is so you can move the bracket slightly.
6: On the left and right of the housing, under the lights, there are 4 studs with 10mm nuts, remove the nuts and be careful not to drop them into the nose.
7: With the 4 nuts and 2 top bolts, and 2 nose panel bolts removed (circled in blue), you should be able to slide the assembly forward and pivot it out from the nose and fender. Be careful as the plug sits behind the assembly and doesn't have a lot of slack, so make sure you get it disconnected before you yank too hard. when that is done, it should look like this. 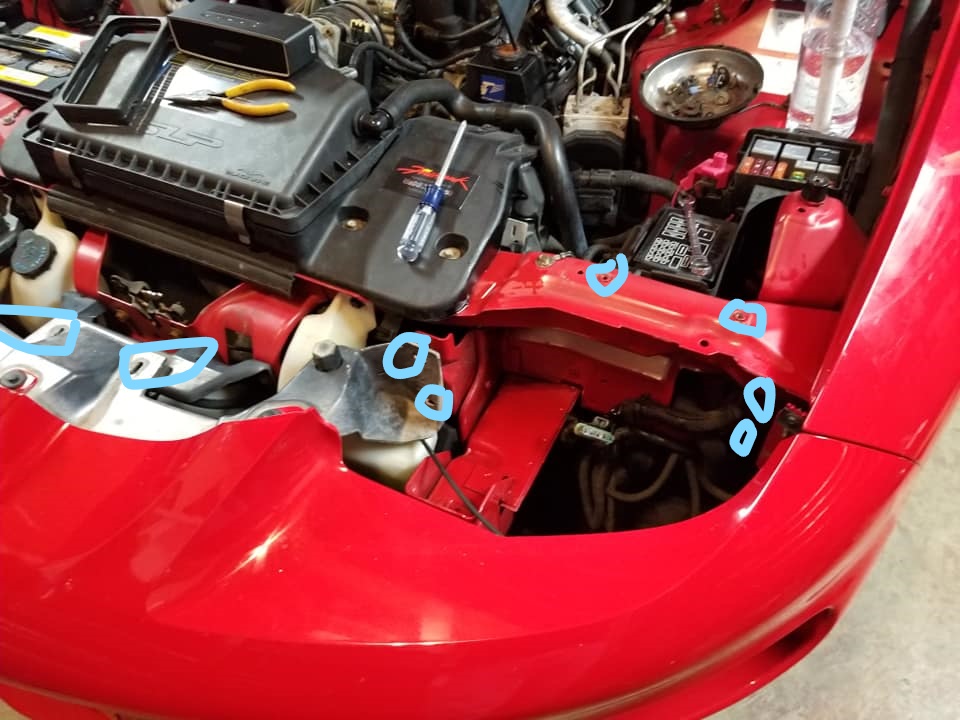 8: while I was in here, since I have a Formula I now had very easy access to the fog light and DRL. I swapped them both out for Silverstars (Fogs are 880's, DRL's are 3157A's). I took note of both of my DRL sockets being in rough shape, which is common, and I will address them in my next post as I still have some wiring to fix. I also found out the 5 pin motor/headlamp connector on my car (the carside) was scorched, so that will be getting a change also.
9: I got a used headlamp assembly from Hawks that had a good hinge, and now is when I pulled out the new LMC headlamps. One thing I noticed immediately was the lamp to car connector was just bare pins. I will also address that in my next post, I'll get some weatherpack connectors and re-wire them 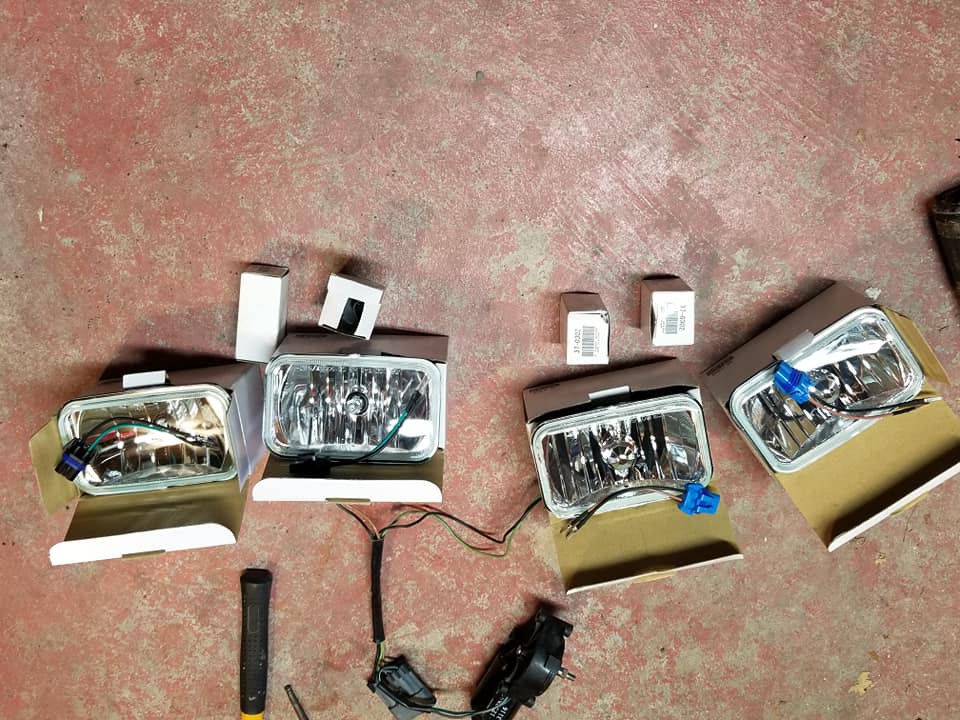 10: First i swapped out the bulbs in the installed housing. for now to hold the wires in I just used electrical tape. This is a TEMPORARY fix, if you do it, do it right. the car isn't going to be driven so for now it is not a concern. 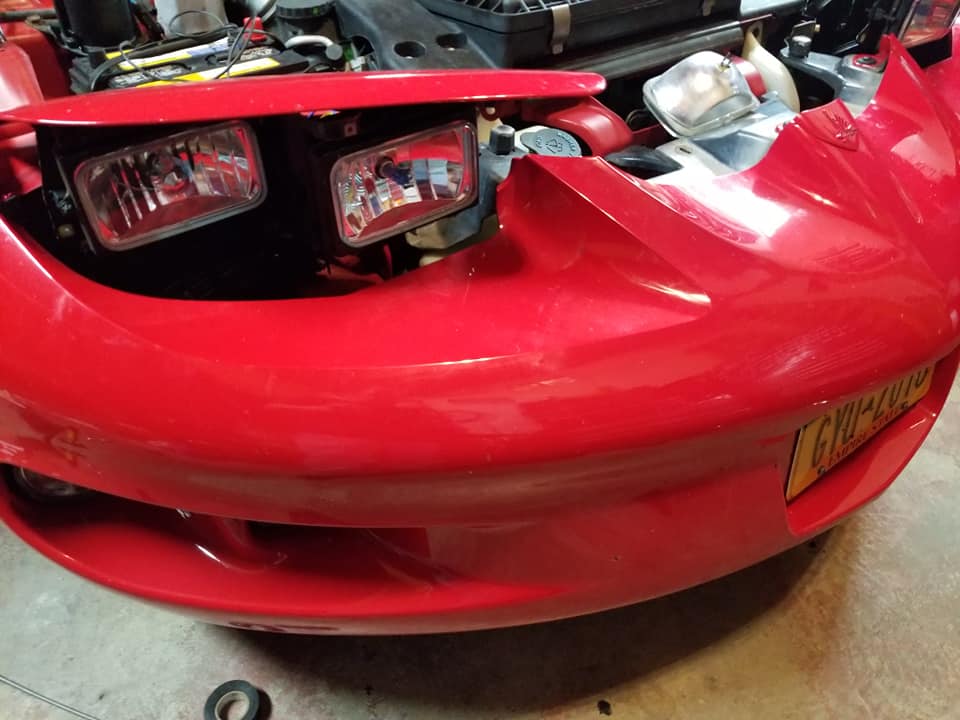 11: I then moved my new headlamp motor over to the new assembly, then installed the donor headlamp assembly in the reverse order I removed it, then the lamps. 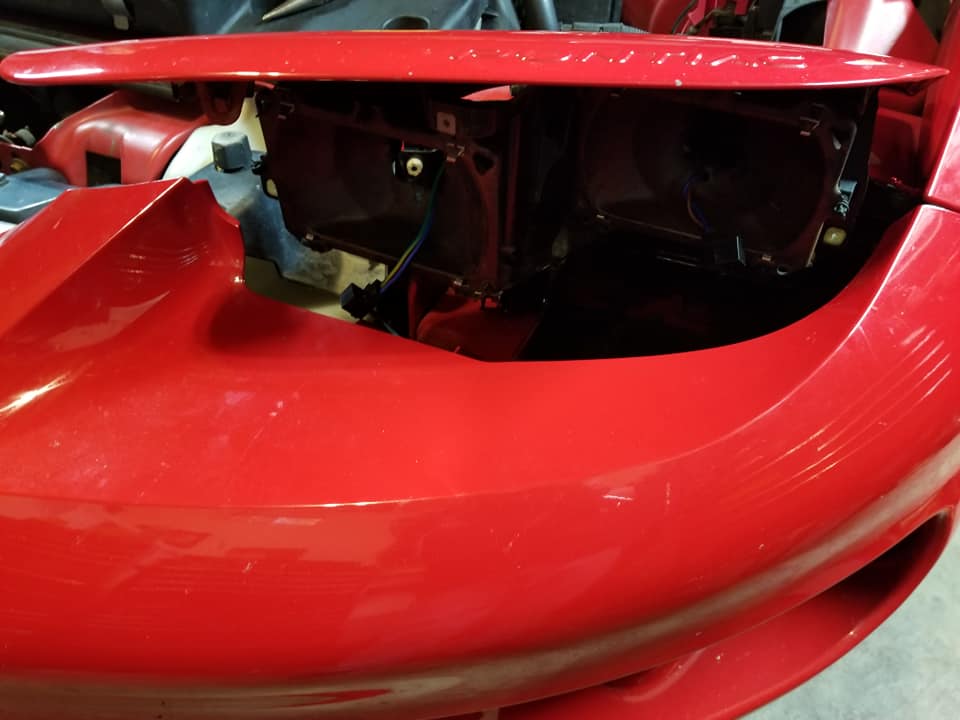 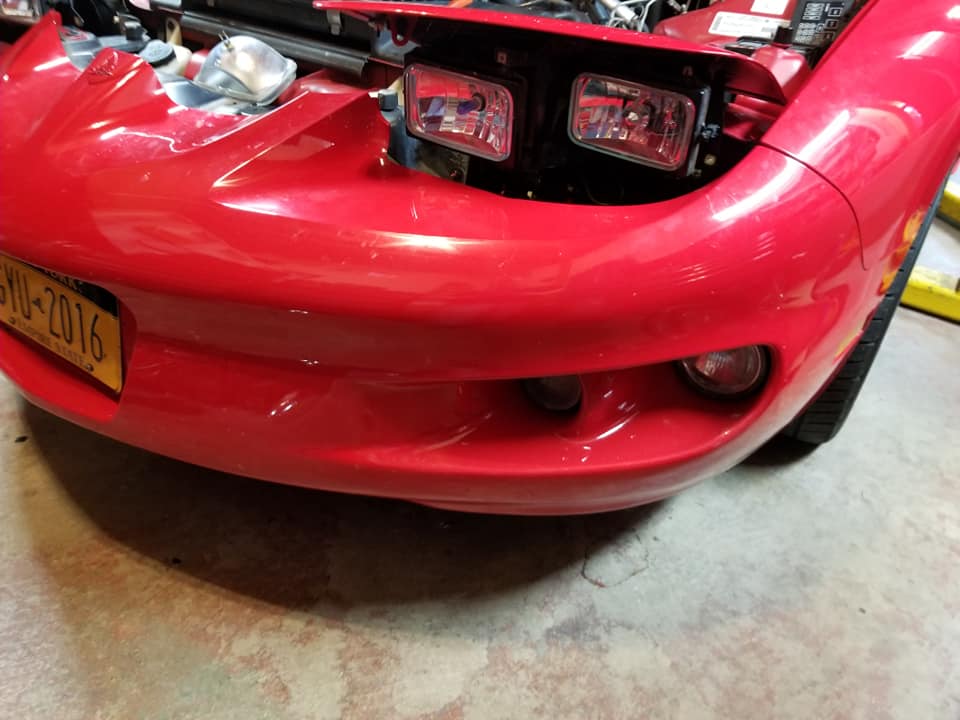 12: Next up was the absolute marathon of adjustments on the housing for alignment. There is a little slop in the entire housing. So before you tighten it all down, try and center in the bucket with the hood, nose and fender to get the gaps right. Tighten down the 4 nuts and 2 bolts on the housing so it doesn't move. After that it is really trial by error of adjusting all the 10mm plastic white bolts. Even from the factory, there didn't seem to be a lot of effort into as they are all over the place. I started with the headlamp closed. i adjusted all the stops, then opeened it and adjusted all the stops. Lastly I put the headlight door on, got it to where I wanted it and then adjusted all the bolts up until they made contact with it. it is VERY time consuming, and takes some patience, and a lot of trial and error.
End result 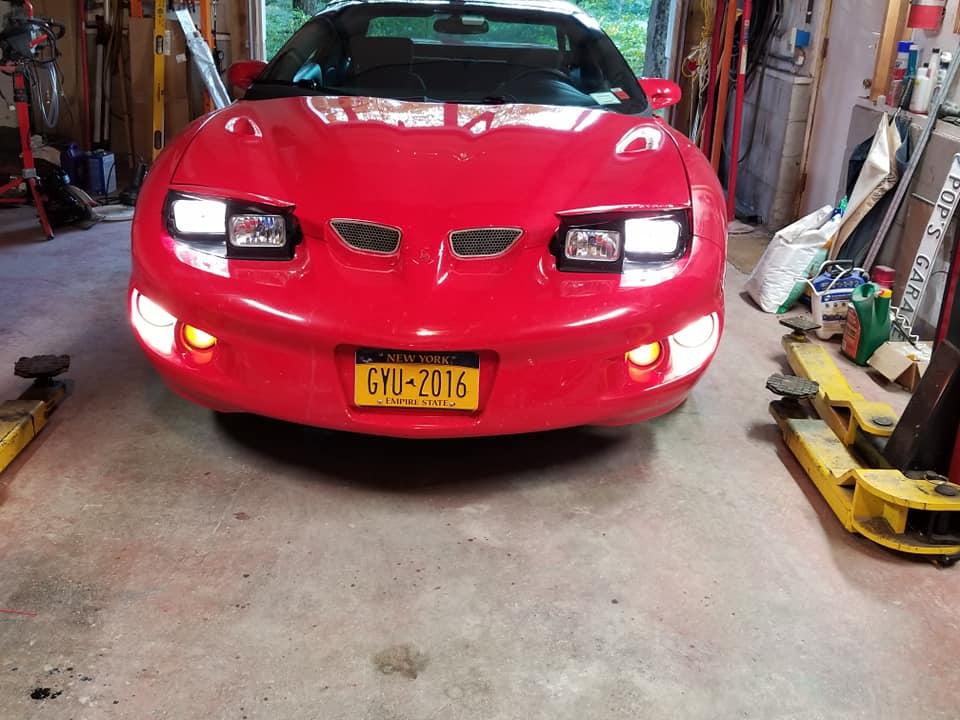